The Dog that Talked to God by Jim Kraus

This week, the
Christian Fiction Blog Alliance
is introducing
The Dog That Talked To God
Abingdon Press (March 2012)
by
Jim Kraus

Jim Kraus grew up in Western Pennsylvania and is a graduate of the University of Pittsburgh. He attended the Paris-American Academy in 1971 and has spent the last twenty years as a vice-president of a major Christian publishing house. He has written more than 20 books and novels (many with his wife, Terri). His book, The Silence, was named as one of the top five releases in 2004 by the Christian Book Review website. He is also an award-winning photographer. He and his wife and 14-year-old son live outside of Chicago with a sweet miniature schnauzer and an ill-tempered Siberian cat. 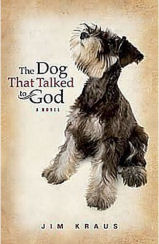 A wonderfully quirky, heart-breaking, heart-warming and thought-provoking story of a woman's dog who not only talks to her, he talks to God.

Recently widowed Mary Fassler buys a miniature schnauzer, Rufus, and her world is turned sideways in the midst of her grief. It seems that Rufus speaks. And not just to her. He also talks to God.

Mary has no choice except to believe Rufus, the miniature schnauzer, who claims to speak to the Divine.

The question is: Will Mary follow the dog's advice, and leave everything she knows and loves? Is this at the urging of God? Or is it something else?

Will Mary risk it all or ignore the urgings of her own heart?

If you would like to read a chapter excerpt from The Dog That Talked To God, go HERE.

Posted by apple blossom at 7:17 AM