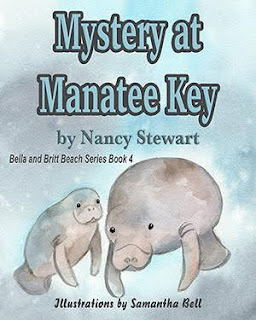 Bella and Britt love to explore along the beach and at more remote places like Manatee Key as well.  It is there that they discover a manatee smuggling ring.

The manatees have already been netted, so the girls must act fast!  But a kidnapper snatches Bella, hustling her into their hideout.  When Britt sneaks a look in the window, she discovers that the ranger is being held, too.  Now it’s up to Britt.  But what can a single girl do?

Mystery at Manatee Key is available at Amazon 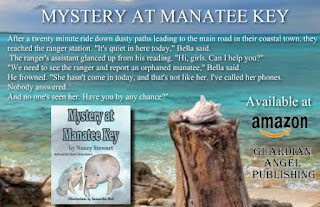 A dark animal circled slowly in the shallow water of Manatee Key. Walking closer, Bella whispered. “A baby manatee. And it has a patch of white near its snout.” Britt frowned. “But where’s the mother? It must be hungry. We should tell the ranger.”
“Yeah,” Bella said. “This one’s too young to be without her mom. Let’s go.”
The friends worked their way through the jungle-like brush back to their bicycles. Britt took the lead. “It’s really hot, but we gotta make time.”
After a twenty minute ride down dusty paths leading to the main road in their coastal town, they reached the ranger station. “It’s quiet in here today,” Bella said.
The ranger’s assistant glanced up from his reading. “Hi, girls. Can I help you?”
“We need to see the ranger and report an orphaned manatee,” Bella said.
He frowned. “She hasn’t come in today, and that’s not like her. I’ve called her phones. Nobody answered. And no one’s seen her. Have you by any chance?”
“No,” they answered at the same time.
“Well, it’s a mystery,” he said. “I won’t call the police yet. But I’m getting worried. Now, about that manatee. Can you take me to it?”
“Sure,” Britt said. “If you can bring us back to town. We rode our bikes here.” He nodded. “Of course.”

Nancy Stewart has been an elementary school teacher and a professor of education.  Having lived in London for ten years, she was a consultant to the University of Cambridge. She is the author of the Bella and Britt series picture books and the authorized biography of Katrina Simpkins, a young girl whose life was forever changed by Winter, the dolphin (Guardian Angel Publishing.)  Her writing of One Pelican at a Time was featured on the PBS special, GulfWatch in 2011.  Nancy’s YA-LGBT novel will be published by Interlude Press autumn of 2017.  She is a member of the Rate Your Story organization as a critique judge. 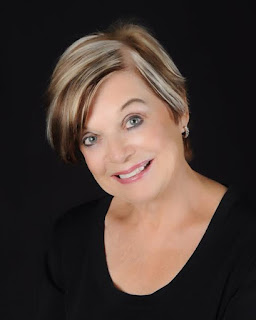 Nancy Stewart has been an elementary school teacher and a professor of education.  Having lived in London for ten years, she was a consultant to the University of Cambridge. She is the author of the Bella and Britt series picture books and the authorized biography of Katrina Simpkins, a young girl whose life was forever changed by Winter, the dolphin (Guardian Angel Publishing.)  Her writing of One Pelican at a Time was featured on the PBS special, GulfWatch in 2011.  Nancy’s YA-LGBT novel will be published by Interlude Press autumn of 2017.  She is a member of the Rate Your Story organization as a critique judge.

Magelica's Voyage to the Land of the Fairies book blast

BeachBoundBooks is pleased to be coordinating a Book Blast for Louise Courey Nadeau's newest children's book, Magelica's Voyage to the Land of the Fairies. The blast will run April 12 - 14, 2017. 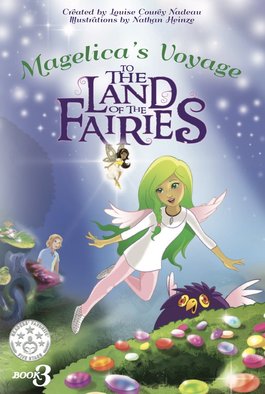 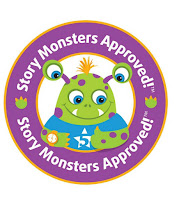 Title: Magelica's Voyage to the Land of the Fairies

Author: Louise Courey Nadeau
Illustrator: Nathan Heinze
Publication Date: April 2017
Publisher: Magelica Inc.
Number of Pages: 35
Recommended Ages: 5 to 10
Summary: Five Star Readers Favourite and Story Monster approved!  New Magelica's Voyage to the Land of the Fairies is finally out! Its the third children's book in the Magelica trilogy. Put on your magical necklace and join Magelica and her friends as they discover that fairies are real and that love is the most powerful magic of all!In this very special adventure, rainbows light up the sky as Magelica and Prince Will embark on an extraordinary voyage to uncover the mystery of her past. Empowered on her quest by her chosen mother, Magelica and her friends follow the secret scroll to the Land of the Fairies. As they make their way through the forest, fear gets in the way and their courage is tested. 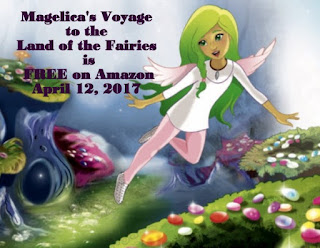 Take a peek inside...

Other books in the series...

Title: Magelica's Voyage
Author: Louise Courey Nadeau
Publication Date: June 1, 2013
Publisher: Magelica Inc.
Number of Pages: 48
Recommended Ages: 5 to 10
Summary: Who ever heard of a girl being hatched from an egg the colour of sapphires? Magelica doesn't know where she came from or who she really is. But when she's transported to the Isle of Dreams in a flying bathtub, she launches into an adventure of discovery, and learns that wonderful things can happen when she uses her imagination, believes, opens her heart and trusts in love. Come fly with her and discover for yourself the power of imagination, gratitude, believing in yourself, and love! In this special first voyage, fantasy, adventure, magical illustrations, empowering messages, and a wonderful cast of enchanting characters come together as Magelica takes young girls and the special people in their lives on a fun, inspiring voyage about making your life magical.

Title: The Rescue (Magelica's Voyage Book 2)
Author: Louise Courey Nadeau
Publication Date: May 27, 2015
Publisher: Magelica Inc.
Number of Pages: 48
Recommended Ages: 5 to 10
Summary: When Magelica dreams of the prince lost on a deserted island, she realizes that it could lead to his rescue. She returns to the Isle of Dreams to tell Queen Raya what she knows. Can they save Prince Will before it's too late? Will the power of laughter and love be enough? 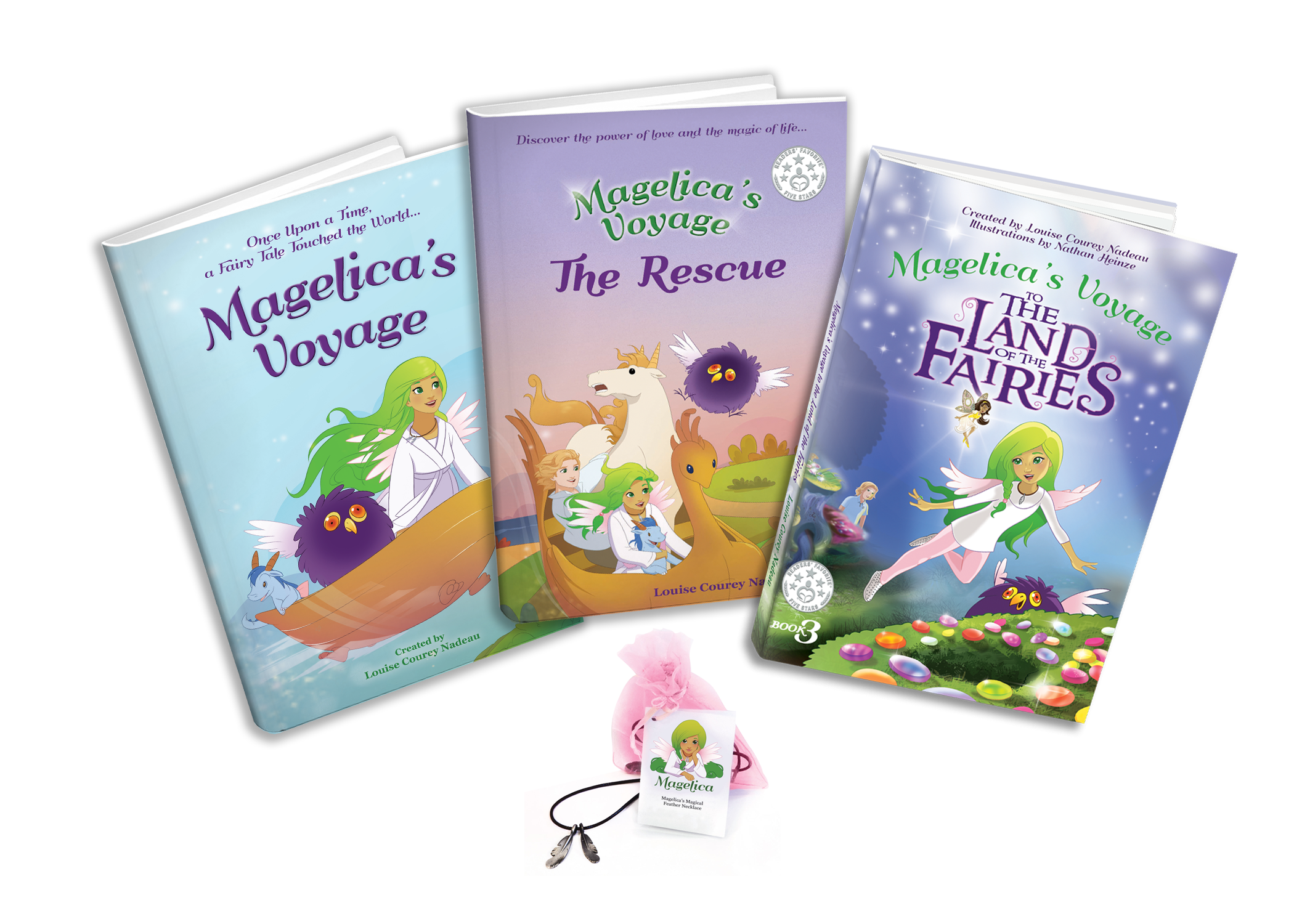 Louise Courey Nadeau, born and raised in Montreal, Canada, wife and mother to two girls and two boys is the creator and author of Magelica’s Voyage, Magelica’s Voyage: The Rescue and Magelica’s Voyage to the Land of the Fairies; an adventure/fantasy trilogy about a young girl on Earth who suddenly grows wings at the age of 12 and sets out on a voyage to discover who she is and where she comes from. Empowered by her Chosen Mother to follow her heart, Magelica and her fun and wacky friends learn that following your dreams is no easy task! Called upon to connect peoples and worlds, and bring balance and harmony, Magelica discovers that the greatest enemy is fear, but realizes that it is no match for courage, believing in herself, and love, the most powerful magic of all.

Author, mother, wife, Founder and CEO of Magelica Inc., former marketing and advertising executive, a tireless fundraiser for many charities, a painter, and gardener, Louise’s passions keep growing. Louise's dream is to create a bond with children and their caregivers around the globe, and make a real difference by entertaining them with exciting stories that stimulate their imagination, and help them discover the power of their own magic.  Books are just the beginning. She is simply getting started!

"Through life's trials and tribulations, I always believed I could. With the Magelica book series, my own beliefs, courage, determination and resolve have been tested over and over. Believing I can, has kept me going!  My goal is for young girls to be empowered to grow up strong, positive and powerful, and for young boys to have the self-confidence to support girls in their goals, thereby creating a new gender balance for a new generation. "The children of today, will grow up to be the parents of tomorrow. By inspiring them now, the ripple effect will eventually change the world."

"Magelica's Voyage is inspired by my life, my family, and the special people and places I love", says Courey Nadeau. "All of the characters in the story, including Magelica are reflections of the person I am- the wacky part, the funny part, the philosopher, the teacher, the caretaker, the chosen mom, the giver, and of course the dreamer. What would Magelica do, I often ask, and I get the answer. When you fly with Magelica, the possibilities are endless and there is magic all around."

Open to: Internationally.
How to enter: Please enter using the Rafflecopter widget below.
Terms and Conditions: NO PURCHASE NECESSARY TO ENTER OR WIN. VOID WHERE PROHIBITED BY LAW. A winner will be randomly drawn through the Rafflecopter widget and will be contacted by email within 48 hours after the giveaway ends. The winner will then have 72 hours to respond. If the winner does not respond within 72 hours, a new draw will take place for a new winner. Odds of winning will vary depending on the number of eligible entries received. This contest is in no way sponsored, endorsed or administered by, or associated with Facebook. This giveaway is sponsored by the author, Louise Courey Nadeau and is hosted and managed by Stacie from BeachBoundBooks. If you have any additional questions feel free to send an email to stacie@BeachBoundBooks.com.

Posted by apple blossom at 10:29 PM No comments: