Hearty and hot, served steaming in a bowl or mug, topped with a sprinkle of cheese or some fresh chopped onion, there aren't many things better than soup, that can warm you to your toes.
It's the classic dish to make you feel better when you're under the weather, when you've had a hard day or when the weather is gloomy...is there anything homemade soup CAN'T do? We think not.
This time of year is perfect for simmering soups and stick-to-your-ribs stews, isn't it?
So, tell us...
What are your favorite SOUP & STEW recipes? Share 'em all in today's Recipe Round-Up!

From Sunday Dinner at Grandma's, this recipe starts with just a few ingredients and is packed with made-from-scratch flavor...vitamin C too!

Link up your SOUP & STEW recipes below
and, if you're joining this hop, link back here
by using the handy button below.

Be sure to visit some new friends this week and VOTE for your favorites by clicking like under their entries...we'll feature the recipes with the most likes on Sunday!

Even if you don't have a blog to link below, tell us about YOUR recipe in the comments or, if you have a moment, share it with us on our website! 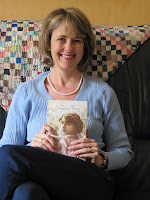 Elizabeth Musser, author of acclaimed novels such as The Swan House, grew up in Georgia, but now lives in Lyon, France, where she and her husband serve as missionaries with International Teams. Look for Two Testaments, her sequel to Two Crosses, in stores now, and Two Destinies, the third book in the trilogy, set for release in Fall 2012.

A word from Elizabeth:
Recent exciting news is that, finally, the whole trilogy is going to be published in 2012. Many readers have written to me throughout the years to encourage me to keep pursuing getting Two Destinies into print. In a fun twist of fate (really the Lord's perfect timing), David C. Cook (who originally published Two Testaments) has offered me a contract for all three novels. The Secrets of the Cross Trilogy will be published in June 2012 (Two Crosses and Two Testaments) and in September, 2012, Two Destinies will be in the bookstores for the first time!

Now 1994, France faces unrest and rising poverty while neighbor
Algeria is in the midst of a blood civil war. Risléne Namani, a French
woman born to Algerian parents, converts to Christianity and falls in
love with Eric Hoffmann, a Christian, committing the unpardonable
sin in the eyes of her Muslim family. Eric must find a way to rescue
her—from a forced marriage in Algeria, or even death.

If you would like to read the first chapter excerpt of Two Destinies, go HERE. 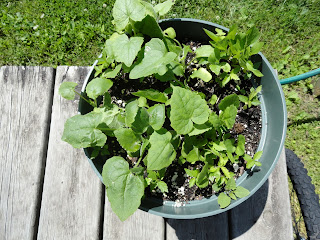 ok so all summer my pot looked like this and my family joked about my pot of weeds I was growing.  I kept telling them just wait...maybe they are fall bloomers... 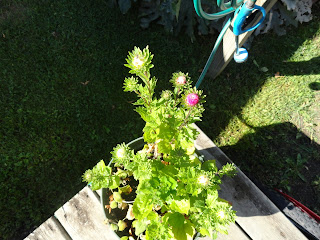 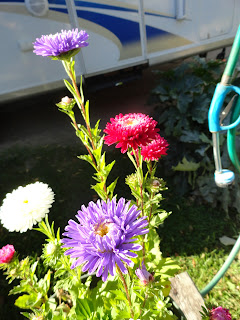 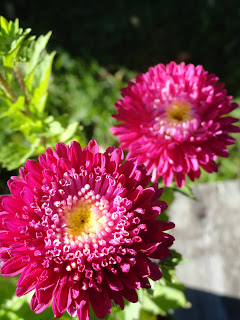 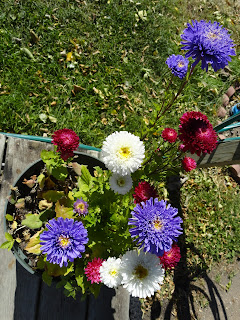 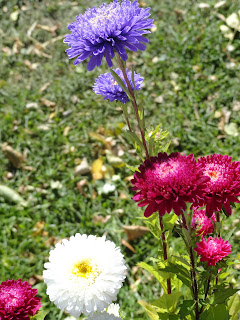 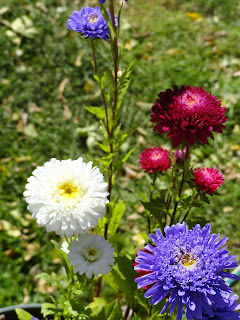 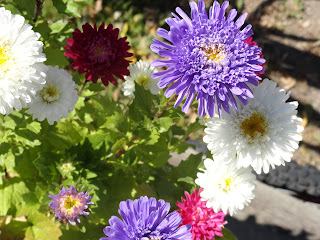 Alice was born in Osaka, Japan in the sixties. Her parents were Presbyterian career missionaries. As a young child, Alice loved to walk down to the local stationer's store to buy notebooks, pencils and scented erasers. In her room, she created stories. The desire to be a published famous author has never left her. Well, two out of three isn't bad. She's the author of Rain Song, How Sweet It Is, Hatteras Girl and A Wedding Invitation (all published by Bethany House).

Alice went to Eastern Mennonite University after graduating from Canadian Academy, an international high school in Kobe, Japan. She majored in social work and has worked across the U.S. in that field. She taught ESL (English as a Second Language) in Japan and at a refugee camp in the Philippines. She also studied Spanish at a language institute in San Jose, Costa Rica.

She has four children--Rachel, Daniel, Benjamin and Elizabeth. Daniel died on 2/2/97 from cancer treatments at the age of four. Since then, Alice founded Daniel's House Publications in her son's memory. This organization reaches out to others who have also lost a child to death. In 2000 and 2003, Alice compiled recipes and memories of children across the world to publish two memorial cookbooks, Slices of Sunlight and Down the Cereal Aisle.

It's been fifteen years since Gideon Miller ran away from his Amish community in Carlisle, Pennsylvania as a boy of fifteen. Gideon arrives in the Smoky Mountains town of Twin Branches and settles in at the local auto mechanic's garage. He meets a host of interesting characters -the most recent acquaintances are Kiki, an autistic teen, and her sister Mari. Known as the "Getaway Savior" he helps other Amish boys and girls relocate to life in modern America.

One day the phone rings. On the other end is his brother Moriah calling from Florida. Of course Gideon welcomes his brother to stay with him and offers him a job. But Moriah is caught in a web which ends in his death and forces Gideon to return to the town of his youth, with his brother's body in the back of a hearse and Mari and Kiki at his side. He must face not only the community he ran away from years ago but also his own web of bitterness. Will he be able to give his anger over to God and forgive his father?

If you would like to read the first chapter excerpt of Still Life in Shadows, go HERE.

Outside my window...the sun is shining beautifully, nice little summer relapse after some fall like weather we had last week.

I am thinking…that I need to get some dusting done today.

I am thankful for...fall colors

From the kitchen…all is quiet.

I am creating…a list of items needed to get accomplished

I am going…to take daughter to work shortly

I am reading…Autumn Winds by Charlotte Hubbard

I am hoping…for date night with hubby tonight

I am hearing...something thudding in the basement

Around the house…it is pretty much quiet here.  daughter getting ready for work and hubby isn't home yet from work.  They pass tonight.

One of my favorite things...sun tea

A few plans for the rest of the week…starting to gear daughter toward thinking on some college preparations that need to be accomplished.

Posted by apple blossom at 3:35 PM No comments:

OK sew I got some sewing in last night for the monthly Sew-In with Heidi and Bobbie.  I didn't do anything spectacular just prodded along on my cross-stitching.  It's coming along.  Here is what was accomplished.....

Labels: FNSi, sewing, this n that

Whether you're a super-fan who wears your team's colors every weekend or if you just like to host a gameday get-together for the fun, friends and food, this week's Recipe Round-Up is sure to hit the spot!
We love a good party, and tailgating celebrations seem to offer particularly yummy menus...dips & spreads, little meatballs & sausages, brownies & cookies and so much more. We love it all!
So, tell us...
What are your favorite TAILGATING recipes? Share 'em all in today's Recipe Round-Up!

From 101 Easy Entertaining Recipes, these little burgers are a deliciously hearty game-day goodie...they'll help tide you over, while still leaving plenty of room for everything else!
Incredible Mini-Burger Bites
Megan Besch of Omaha, Nebraska, shared this recipe with us. She writes, "My family adores these...yours will too! We make them for football parties and summertime get-togethers."

Mix first 7 ingredients in a bowl; refrigerate for an hour. Spread meat mixture over a large, greased baking sheet. Cover with plastic wrap and roll out evenly with a rolling pin. Discard plastic wrap; bake at 400 degrees for 12 minutes. Slice into 24 squares with a pizza cutter. Top each roll with a burger square, a quarter cheese slice and garnish as desired. Makes 24 mini sandwiches.


Link up your TAILGATING recipes below
and, if you're joining this hop, link back here
by using the handy button below.

Even if you don't have a blog to link below, tell us about YOUR recipe in the comments or, if you have a moment, share it with us on our website!

Posted by apple blossom at 12:31 PM No comments:

All Things Possible by Mark Schultz 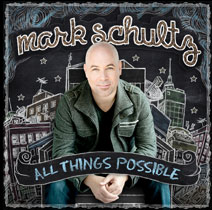 Ok so I've been putting it off and putting it off so now is the time to mean business.  I've had this cd for some time and just keep telling myself I'll get the review posted.  So I decided that there is no good time like the present.....

If you like contemporary Christian music then Mark Schultz "All things Possible" would probably make a hit with you.  Myself I'm not too into Contemporary Music but I'm on the older side.  The younger crowd will probably love this cd.  My teen daughter didn't seem to mind it as we listened to the cd.  I'm sure my 20 year old would approve of it also.  There was one song I thought ended very abruptly though I told my daughter "well, that just ended like now."  there was no leading up to it or nothing.  So we checked to see the title of the song and it was Be Still.  Kind of had to laugh I said, "Well, it definitely got still."  I think the title song was one of my faves on the cd "All Things Possible".

Here is s listing of the songs on the CD:
Visit Mark's web site here.

A copy of this CD was provided by the Media Collective in exchange for my honest review.

It's coming this Friday night...  The Sept. Sew-In  and I will get to participate this month hubby will be at work. I'll have to start early in afternoon sew I can get it in before daughter gets off work. But I'm planning on sewing.....What will I do?????  haven't decided yet but watch for my post on Saturday .

Posted by apple blossom at 1:49 PM No comments:

Labels: FNSi, this n that


Haven't don a WWW lately so I'll post one today...

My review will be posted for this next week; however I am running a spotlight/giveaway here for a copy of this book.