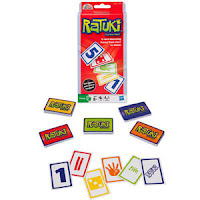 Have to tell you about this game my family was introduced too this weekend.  We are a game lovin' family.  If you saw our spare room games and books have taken over.  Anyway, this game is a BLAST, very fast paced and loads of FUN.
Hurry up, think quick and play fast! Ratuki (ra-too-kee) is not your traditional everyone plays at the same time card game. Each player gets their own color deck of 35 cards, which contain different numbers and symbols for 1 to 5 and two wild Ratuki cards. All players race to get rid of their cards by forming sequences on shared stacks in the center of the table, and at the same time race to collect cards from those stacks. Cards can be played on stacks in ascending and descending order from 1 to 5. Playing a 5 or a wild card allows players to collect a stack. A new stack can be started by anyone, by playing any version of a 1 card. The number of center stacks allowed equals the number of players. If players are unable to play, players discard and draw from their own draw and discard piles, always keeping 3 cards in their hand. Quickest player to get rid of their cards stops play for all, leaving other players left with cards. Each player counts the number of cards collected and subtracts the total number of cards left in their hand, draw and discard piles. Cards left in the center of the table are out of play. First player to 100 wins.Playing Time: 15 minutes for 5 players.For 2 - 5 players, ages 7 and up.Contents: 5 decks of cards (175 cards total) and instructions.

Ratuki is a new, fast-paced card with no turns—just pandemonium as players race to grab the most cards from their opponents. Each player has a colored deck of cards and starts with three cards in their hands and as many piles on the table as there are players in the game (up to 5). At the signal, players race to build piles of cards from counting in any direction from 1 and up to 5, playing a card from their hand on any card on the table. If you don't have a card you can play—discard and draw from your deck, but be careful your discard pile is going to count against you.
As you play, the first player to slam a 5 on top of a pile shouts "Ratuki!" and wins the cards—the next player to have a 1 starts the next pile. But you have to think fast—there are no turns in this game. Everyone plays at the same time. Also adding to the frenzy are the cards themselves. Each card has a number on it, but each card also has a different way of showing the number, such as lines, hand signals or the number written out. Players must think fast and act fast. The player with the most cards when everyone has played through their decks wins—but you have to subtract what's in your discard pile, so you won't know who's won till the final count is in. Ratuki comes with 170 cards, five reminder cards, and instructions.

There's a lot of action and a lot of fun in Ratuki. The game is easy to learn and play for the whole family. It gets players' minds working as they figure out what number is on their card and then quickly try to play the cards.

Ratuki is for two to five players ages 8 and up.


What to Be Aware of

One game of Ratuki takes about 15 minutes to play. It's not limited by age, and keeps players on their toes, slamming cards—and planning strategy. This would make a great addition to family game night.

Posted by apple blossom at 6:50 AM

Labels: this n that