Tears of the Sea by MaryLu Tyndall

Doomed by the evil warlock Forwin to wander the ancient seas as a mermaid for all eternity, Perdita longs for the release death would bring. Every ten years she has a chance to break the curse when she emerges from the sea fully human for one month. The catch? She must find a man willing to die for her.

Captain Savion Ryne wants nothing to do with beautiful women. It was one such woman whose betrayal ruined his life and his reputation. After nearly drowning in a storm at sea, he wakes on an island with visions of a dark haired mermaid pulling him from the water. When a woman similar in appearance begs for his protection, he is suspicious.

Perdita has never met anyone as honorable as Savion. Even though he shuns her every advance, she falls for him. But as the end of her time on land approaches, she faces the hardest decision of all, save Savion and remain cursed for all eternity or break the curse and watch the man she loves die.

MaryLu Tyndall isn't a new author to me.  I have read many of her books and she leaves ya wanting to read the next one.  Teares of the Sea is no different than  the rest of her books.  It is an excellent read that will keep you turning the pages.  I don't know how she can keep pulling more and more sea stories out of her hat, but she does.  They are all new and fresh and beautifully written.  This one will keep you in suspense with each turn of the page.

Best-selling and award-winning author, MaryLu Tyndall dreamt of pirates and sea-faring adventures during her childhood days on Florida’s Coast. After obtaining a degree in Math and working as software engineer for 15 years, she decided to test the waters as a writer. With now more than fourteen books published, she makes no excuses for the spiritual themes embedded within her romantic adventures. Her hope is that readers will not only be entertained but will be brought closer to the Creator who loves them beyond measure. In a culture that accepts the occult, wizards, zombies, and vampires without batting an eye, MaryLu hopes to show the awesome present and powerful acts of God in a dying world. MaryLu makes her home with her husband, six children, and several stray cats on the California coast, where her imagination still surges with the sea.

Her latest book is the fantasy romance, Tears of the Sea.


a copy of this book was provided in exchange for my honest review by....

Posted by apple blossom at 12:01 AM No comments:

We Support You Blog Hop - Day 1

Jan 29th
Life in The Scrapatch
Living With Purpose
What About Rheema?
Kwilt Krazy

Posted by apple blossom at 6:48 PM No comments:

I recently went to the movies with my two little girls, and per usual, I made sure we arrived early so we wouldn’t miss any of the previews.  I love stories, and relish the opportunity to watch highlights of upcoming movies so I know what to look forward to next!  This time, I saw a preview for Disney’s Cinderella.  The Cinderella story has been knocked around a bit lately for portraying the standard damsel in distress character rescued by a prince.  But there was a line in the preview that made me think that I wanted to see this movie: "Have courage, and be kind," Cinderella’s mother says. "Where there is kindness, there is goodness and where there is goodness, there is magic."

I sat there, popcorn halfway up to mouth, and thought, “yes!”  Because this is exactly the sort of concept I address in the Pumpkinheads® books: kindness, courage, empathy, compassion, tolerance… many of the qualities that sometimes get forgotten or overlooked in our fast-paced and material driven society.  There is magic that occurs when people are kind and courageous, loving and generous, thoughtful and appreciative –a magic that is even more beautiful than turning a pumpkin into a coach or rags into a beautiful blue dress.  It is the magic that happens when people connect, care for and love one another.

Pumpkinheads® is a series that comes straight from the heart. As a writer, I wanted to create stories that would serve as examples of the kind of behaviors I hoped my children would exhibit in life.  The vessel for these lessons became characters that are fun and relatable, so that for kids reading about the characters, their dilemmas, and the solution to their problems, it would be like learning from friends!

There is magic to be found in loving oneself, others, and the world around us, and I hope that my stories are as enchanting to kids as a little bit of fairytale magic too!

Karen Kilpatrick is the author and co-illustrator of the award winning children’s books series, Pumpkinheads® (Carmin Cares, Ella’s Toys, Love Monster Lulu, Sage’s Song and Danza’s Message). She currently is working on new Pumpkinheads® titles and other books for children. Karen also writes adult short stories, and is a winning author in the Florida Writer’s Association’s collection contest, with her short story, The Envelope, published October 2014. She lives with her husband and three children in . To learn more about Pumpkinheads ® books and for fun art activities, games, and stories, you can visit www.pumpkinheads.com.

a copy of Karen's books were provided in exchange for hosting this tour by....

A Stitch in Crime by Cathy Elliot

This week, the
Christian Fiction Blog Alliance
is introducing
A Stitch in Crime
Abingdon Press (January 20, 2015)
by
Cathy Elliot

Cathy Elliott is a full-time writer who lives in northern California and whose cozy mysteries reflect her personal interests from playing her fiddle with friends to antique collecting and quilting. Besides collecting (too much) cool fabric, she also enjoys hunting for antiques and is several years into recovery from her eBay addiction. UPDATE: She backslid a while back, enticed to bid on a 1945 Singer Featherweight. (She won.) But now she’s back on the wagon. Except for the recent crazy quilt pillow purchase. She also leads music at church and enjoys time with her grandchildren.

Thea James has accepted an assignment as co-chairperson for Larkindale’s first quilt show extravaganza. Juggling the new assignment with running her antique business, she’s already feeling frayed when things start to unravel. Mary-Alice Wentworth, a much-loved town matriarch, respected quilt judge, and Thea’s dear friend, is covertly conked on the head during the kick-off Quilt Show Soiree, throwing suspicion on her guests. It also appears that a valuable diamond brooch has been stolen during the attack. The family is furious. But is it because of their mugged mother or the missing diamonds? When a renowned textile expert goes MIA and the famous Wentworth heritage quilt disappears, Larkindale’s reputation as a tourist haven is at risk. Thea attempts to piece the mystery together and save the town’s investment in the quilt show before Mary-Alice is attacked again . . . with far worse results.

If you would like to read the first chapter of A Stitch in Crime, go HERE.

Posted by apple blossom at 5:44 PM No comments:

For the sew-in I worked on my sewing machine cover.  With each sewing session I get closer to completing it.  Here is what I accomplished for the sew-in....

I was able to finish the quilting part now I can cut the pieces and sew the cover.  However, I didn't quite get the cover finished for the Jan. finished challenge.

Someone went to Hobby Lobby.  Not a good place where the wallet is concerned.  hehehehehehe!  Here's my buy....

Who can pass up Pink? Not me obviously! 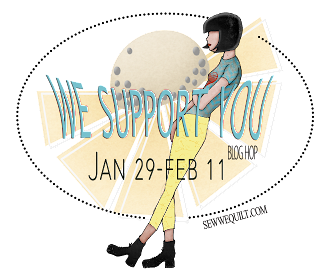 Well it is that time again.  I'm gonna try to get some sewing in.  I have lots of irons in the pot.  Just gotta get motivated.  Don't know what Friday Night Sew-in is all about check out the details here.  Sign up here.

Posted by apple blossom at 6:21 PM No comments:

Labels: FNSi, sewing, this n that, We Support You BH


Back a few weeks ago I won a fabric bundle @ Happy Quilting blog site.  It was from the intrepid thread bundle....

It is all very lovely.  Now I must get planning.  Sew much to sew and SEW little time.


A copy of this book was provided for in exchange for my review and hosting this tour by...

Posted by apple blossom at 10:39 PM No comments: