When Calls the Heart: Trials of the Heart 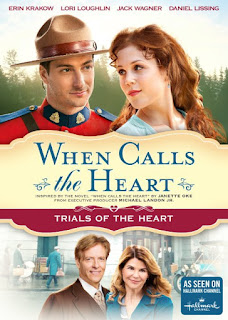 Synopsis-  Elizabeth Thatcher (Krakow) is an independent, strong-willed teacher who has foregone the life of the big city and found a job, a home – and romance with a handsome Mountie named Jack – in the small frontier town of Coal Valley. But when she learns that her mother has taken ill, she returns to Hamilton, her hometown, with Jack as her escort. Once in the comparably opulent Hamilton, Elizabeth and Jack are confounded by Jack's ne'er-do-well brother and Elizabeth's former suitor, Charles Kensington. But it is Elizabeth's father, William, who drives a wedge between them when he suggests to Jack that Charles would be a better match for his well-bred daughter.

Elizabeth and Jack are back.  Yes!!!  I loved season one and season two has started out wonderful, exciting and some new faces added to the mix.  When Calls the Heart is a great family friendly series based on Janette Oke's book series.  This first movie has started out with some surprises and I can't wait to see how they are going to end up.  It's so hard to wait and see with this excellent series.  It definitely keeps you wanting more that is for sure.  They aren't coming out fast enough for this gal.

Michael Landon Jr. – Executive Producer:  Michael Landon Jr., son of the late television legend Michael Landon, has been in the film business for over 25 years.  With two of the highest rated films in the history of the Hallmark channel, and several top ten releases targeted to the Christian market, Michael has become known for creating heartfelt, inspiring films that connect to the family.  He has developed and/or produced, directed, and written screenplays for Fox, CBS, NBC, Disney, Sony, Lifetime, and others.

Brian Bird- Executive Producer : Brian Bird is co-founder with partner Michael Landon, Jr., of Believe Pictures, a film and television production company.  He was co-executive producer and writer on the successful television series, Touched by an Angel.  Adding to Brian’s success, he had also written and produced episodes of Evening Shade, Step by Step and The Family Man.  Most recently, Bird wrote and produced Gametime, a two-hour television pilot for NBC, The Shunning, inspired by the novel by best-selling author Beverly Lewis, for the Hallmark Channel, and Not Easily Broken, adapted from the novel by T.D. Jakes and released theatrically by Sony/TriStar.


*I was given a complimentary copy of this DVD for my review. All opinions are my own.*