The Mercy by Beverly Lewis

Beverly's first venture into adult fiction is the best-selling trilogy, The Heritage of Lancaster County, including The Shunning, a suspenseful saga of Katie Lapp, a young Amish woman drawn to the modern world by secrets from her past. The book is loosely based on the author's maternal grandmother, Ada Ranck Buchwalter, who left her Old Order Mennonite upbringing to marry a Bible College student. One Amish-country newspaper claimed Beverly's work to be "a primer on Lancaster County folklore" and offers "an insider's view of Amish life."

Booksellers across the country, and around the world, have spread the word of Beverly's tender tales of Plain country life. A clerk in a Virginia bookstore wrote, "Beverly's books have a compelling freshness and spark. You just don't run across writing like that every day. I hope she'll keep writing stories about the Plain people for a long, long time."

A member of the National League of American Pen Women, as well as a Distinguished Alumnus of Evangel University, Lewis has written over 80 books for children, youth, and adults, many of them award-winning. She and her husband, David, make their home in Colorado, where they enjoy hiking, biking, and spending time with their family. They are also avid musicians and fiction "book worms." 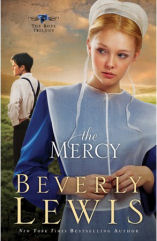 Rose Kauffman pines for prodigal Nick Franco, the Bishop's foster son who left the Amish under a cloud of suspicion after his foster brother's death. His rebellion led to the "silencing" of their beloved Bishop. But is Nick really the rebel he appears to be? Rose's lingering feelings for her wayward friend refuse to fade, but she is frustrated that Nick won't return and make things right with the People. Nick avowed his love for Rose--but will he ever be willing to sacrifice modern life for her?

Meanwhile, Rose's older sister, Hen, is living in her parents' Dawdi Haus. Her estranged "English" husband, injured and helpless after a car accident, has reluctantly come to live with her and their young daughter during his recovery. Can their marriage recover, as well? Is there any possible middle ground between a woman reclaiming her old-fashioned Amish lifestyle and thoroughly modern man?

If you would like to read the first chapter of The Mercy, go HERE.