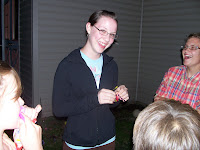 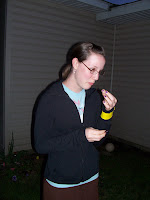 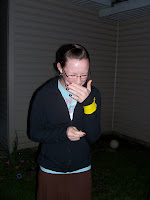 I am told these candies known as "Warheads" are extremely sour upon first putting them in.  So who pulled the prank on my lovely daughter at camp?.... 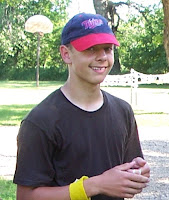 Now doesn't that look like an innocent face?  He better sleep lightly.  The battle rages.  She doesn't get mad she gets even.  hehehe  and her dad's response when he heard.... "Way to Go John!"  lots of love and sympathy from dad.

When he handed her the candy and she finally accepted it (yes, she was skeptical) he then turned to me and said, "Get a picture of this."  So I quickly turned on the camera and got above pictures.  After seeing her reaction I told him..."You should have said, 'video tape this."  Quickly I switched it over to video and got the remainder on video....Enjoy (at my daughter's expense). The joke was played on her at night so it is a bit dark, but oh, so fun.

posted at:
A Renaissance Woman