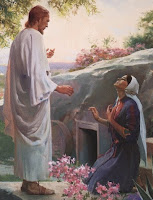 With this weekend being Easter and all I ran across this Recipe at Raising Homemakers.  I have seen recipes in the past for Resurrection Cookies, but these I think are by far the easiest to make, well it sounds like it I haven't tried them.

1. Open can of crescent rolls and separate into triangles. The rolls represent the linen cloth used in covering the dead.
2. Dip and roll one marshmallow (representing the body) into melted butter. The butter represents the oils used in anointing the dead body.
3. In a small bowl, mix the cinnamon and sugar together. Roll the marshmallow in the mixture. The mixture represents the spices used in burials.
4. Place the marshmallow in the center of the crescent triangle and carefully fold the dough around the marshmallow. (Pinch the edges tightly to seal in the marshmallow as it melts.) Put each crescent-wrapped marshmallow on a slightly greased cookie sheet or in a greased cupcake pan.
5. Bake the rolls in a 350 degree preheated oven for about 10-15 minutes or until they are golden brown. The oven represents the tomb.
Let them cool. When the kids bite into them, they will see that the inside is empty!

Posted by apple blossom at 9:04 AM

Labels: holiday, in the Kitchen, recipes